There's something stupidly exciting about the opening night of a film festival. On Wednesday, as I frocked up at home after work, I felt quite elated and excited about the evening ahead; especially the after-party. I do love a good occasion, on occasion.

So, doing my best impression of semi-goth dapper, and accompanied by a be-suited No-Necked Monster, off we went - first for a glass of bubbles and conversation at The Long Room; then up the red carpet and into the decadent confines of the Regent Theatre (pictured left). Built when going to the flicks really was an occasion, the Regent - an opulent picture palace that first opened its doors in 1929 - was abuzz with an opening night crowd in all their finery (although The Age's Jim Schembri looked as scruffy and cantankerous as he always does). In theory the dress code is black tie, but most of the men made do with a lounge suit - even so, their were more than a few penguin suits on display. Some cute men too, but tonight, I wasn't really in the frame of mind to check out the talent...

Things followed a predictable pattern - at first. Speech from the Festival Chair, check. Speech from the major sponsor, check. Speech from the Premier, check. Then - in a surprise - the opening night short film started. Especially surprised were the cast and crew of the locally made Remember My Name who were in attendance, as only their producer knew the flick had been selected for opening night. A parade of talking heads - intense and passionate individuals all - spoke of their loyalty and their committment to an upcoming event, the details of which were unknown to us, and for which they had long prepared. Intimations that their activities were illegal, possibly even dangerous, were dropped in as the film went on. Some said that they weren't afraid of what they were about to do, only of their leader. The denoument was a delightful surprise, and a spectacular feel-good moment that has to been to be believed (no spoilers from me to ruin the fun for you). Well shot and structured - though over-long (I felt it needed to be edited back by a couple of minutes to elevate the pace and tension) Remember My Name was a great way to start the festival.

After it finished, first-time festival director Richard Moore took to the stage to welcome us all, to thanks the sponsors, and get things underway. 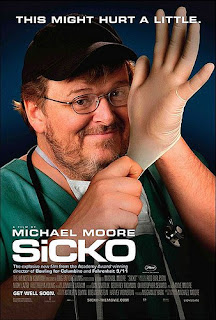 The opening night feature was Michael Moore's Sicko. Like all the features to date by this provocative propogandist for social justice, Sicko is an undeniably entertaining but nonetheless manipulative, heavy-handed and one-eyed examination of the director's latest cause celebre - in this case, the abject failure of the US health system. To be exact, as many of us know, the USA doesn't have a health service. Unlike the rest of the western world, the concept of socialised medicine, whereby we all contribute to the cost of health care for the whole of society, simply doesn't exist in the US.

The result, as Moore shows us in his film, are people being turfed out of their sickbeds and dumped on the footpath when they can't pay their hospital bills; and people dying because their health insurance companies are more concerned with saving costs than saving lives by refusing to provide cover for vital surgical procedures.

While elements of the film were truly moving - such as a scene where emergency service workers who worked at Ground Zero on 9/11 met with their counterparts in Cuba; and the firsthand stories of people who have suffered or lost loved ones due to the flaws of the US health system - too often the film's message was lost in puerile humour, or shot down by its inability to present a fair and even-handed argument.

To be fair, I'm obviously not part of the demographic Moore's film was aimed at, and it would be fascinating to sit in a cinema in a fly-over state in the USA and watch the audience's reaction to the case Sicko makes (although he's also such a well-established brand that I doubt many Republican voters would actually be prepared to go and see the film). It's also too long - at two hours duration, the excision of superfluous material would be a definite improvement. Oh, for more ruthless editing!

Then it was on to the party, held underground, in the stunning Regent Ballroom; a gorgeous, garish architectural fantasy straight out of decadent Hollywood's vision of the past. The champagne flowed, but food was lacking in both zest, diversity and availability. The party highlight? My seeing Sir Ian McKellan and being utterly star-struck, to the point where I gushed like a 13 year old, "You are a god among men!" I blush even now at the thought that I actually said that to one of the world'd leading actors and advocates for gay rights.

Eventually, at midnight, we left for bed. I would have loved to have stayed and partied on, but I had to be up early for my radio show, so I missed seeing Richard Moore cutting a rug on the dancefloor. If that's not a sign of change at the festival, I don't know what is!

Remember My Name: three stars
Sicko: two and a half stars

The Simpsons Movie (which I saw last night - an innocculation of popcorn for the mind before delving deep into MIFF from tonight): three stars
Posted by richardwatts at 12:38 pm

Fuck no, LOL - we means me and my housemate.

I liked both opening night films more than yourself, but I think we're in agreement that they were good choices for the night (the audience is very different on opening night to the rest of the festival).

I some of the participants of Nobody Knows Me, and they knew that it was screening. But it was top secret and I certainly didn't know.

Good review of Sicko. The New Yorker had a recent review that said pretty much the same thing. Moore's film-making style is rather too meretricious for my liking - the gimmicks that worked well on 'The Awful Truth' aren't necessarily good documentary techniques. Interesting that the organisers chose it as a headliner film, btw. (I'd like to see a similar documentary about the losers of our socialist medical system, but it hasn't happened yet.)

From what I know of his reviews and interview technique, Schembri seems to deliberately cultivate a cantankerous and combative image - perhaps not such a bad thing for a critic!

Paul - definitely I think Sicko was a striking choice for an opening night film. It instantly branded Moore's program as different to his predecessor, and generated much debate at the party afterwards.

I was prepared to give Moore the benefit of the doubt with this film because it's hard to disagree with his central thesis. Too bad he hasn't learnt anything about persuasive filmmaking.